The Ups and Downs of Tournament Table Tennis

After a very entertaining Semi-Final and hard fought win for Jimmy Butler over Ricardo Jimenez of Puerto Rico, the Finals started with Jimmy playing Adeyinka Hammed TaeWoo. It looked like a normal match to begin with, but Jimmy had tweaked his back while playing Ricardo in the Semi Final match. Seeing Jimmy in pain with every hard shot, after the first couple games he had to withdraw due to the back injury. Of particular note to every player, please notice the Sportsmanship by both players as Jimmy had to withdraw.

Jimmy Butler and Hammed Adeyinka play hard to see who the eventual Champion would be.
Jimmy defeated Hammed in 5 games to claim the title!

Many other worthy players played for money prizes in all the other categories!  Great fun!

For the exciting final, Emmanuel Tuglo defeated top seed Derek May in an energy-filled match!

The winner of the seven-game thriller:

These two friendly, local warriors provided us all with a great final match at the Paddle Palace Atlanta Winter GRR, on Saturday. Right down to the very last point of the seventh game, a really entertaining and exciting match.
In the end, Oluwole Ayangade, left, prevailed over Emmanuel Tuglo. You can watch the video of the final here.

AGTTA hosted the 5th African in Diaspora on 8/3/2019, and it was a resounding success. 104 eager players had a wonderful time in the multiple-event tournament.
African Meat Pies were served for lunch, and they were delicious, many thanks to all the tournament organizers and sponsors for a great job!

Liang Jishan prevailed as the Champion, defeating Hammed Adeyinka to claim the $1,000.00 first prize.
The tournament featured numerous players rated over 2000, which ensured a great number of exciting matches.

AGTTA and Paddle Palace look forward to sponsoring this tournament again next year!

AGTTA has hosted the Georgia Games for several years. This year, 130 players participated in this two-day Table Tennis extravaganza!
One of the constants in the Georgia Games is the Cup challenge between USATT affiliates clubs for the privilege of having their team’s name on one of the many plaques that adorn the Georgia Cup! 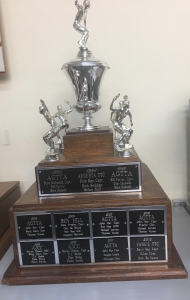 We also have a Cadet Team Cup competion, for the Cadet Cup:

Another very special award given is the Thomas Nunes Sportsmanship award, given annually in honor of Thomas, who was known as a person of great sportsmanship in the game. The trophy was awarded to Jinhai Feng based on his good sportsmanship toward his opponents.

The Men’s Singles division was won by Kaipeng Xu from Georgia Tech, who faced Joe Ryan of AGTTA in a fantastic singles final. Cody Wang of AITTA earned The Bronze medal.

We experienced a packed house and 110 happy players enjoyed the competition for prize money and trophies in 9 well-arranged
events throughout the day.

The events ranged from U900 through the Championship round. Paddle Palace provided gift certificates for winners
where no cash prizes were available.
The crowd was treated to a spectacular 7-game Championship Finals match between Hammed Taiwo Adeyinka and Kazeem Makanjuolahas, a wonderful championship match, with Adeyinka prevailing in the end and capturing the $1,000 first place Prize. A great match, sprinkled with quite a few standing ovations for most excellent points, enjoyed by all!
You can watch the final here.
We appreciate Paddle Palace’s continued sponsorship of our tournaments!

Emmanuel Tuglo and Petrica Stirbu has a wonderful Championship
Match, with Emmanuel prevailing in the end.  A great match, enjoyed by all!

You can watch the final here.

We appreciate Paddle Palace continued sponsorship of our tournaments

The Paddle Palace Winter Greater Round Robin was a rousing success on November 3rd.
Oluwole Ayangade and Emmanuel Tuglo, local favorites gave the crowd of spectators a wonderful final Championship!!!
View the video of the match here.

Results of The Paddle Palace African In Diaspora Tournament

In other great matches the U2300, had two of our younger players, both from AITTA, Daniel Ng and Sabrina Zhu, dueling it out with Daniel Ng prevailing.

Great matches and great sportsmanship, congratulations to all our winners, and competitors for a GREAT Fall Open!

Check out our Tournaments page for frequent updates to events hosted by AGTTA.

It was a pleasure to host this wonderful tournament.  We look forward to having it again next year with an expanded format.
Highlights: this time we were happy to have Atanda Musa from Nigeria play and a number of players from all over the US as well. Di Yu, of Triangle Table Tennis was the eventual winner, with AJ Carney, also from Triangle Table Tennis becoming the Runner Up. Rachid El BouBou, finished 3rd, and Atanda Musa 4th.

Alberto Prieto, owner of Valor, is offering to anyone who pledges $150 or more to our fundraiser, a 35% discount on online orders (offer not to be combined with sales or other discounts).

Here are the winners from our June Atlanta Table Tennis Tournament:

Here are the winners from our March Atlanta Table Tennis Tournament:

The finalists (photo by Oana Hogrefe):

Congratulations to Mississippi College for winning the championship!

The Atlanta Table Tennis Open was much enjoyed by all participants! Thank you, to the organizers and players, for making it such a success!

The NCTTA Division Championship, was hosted by AGTTA, Inc. in Atlanta, Ga. this Saturday.

In cooperation with the NCTTA, AGTTA, Inc. is proud to host this Collegiate tournament free of charge for the second straight year.

Brian Crisp, President of AGTTA, Inc. and Willy Lepaurlo, President of the NCTTA, work together, along with other NCTTA and AGTTA officials and members to hold this tournament.

Brian said he would like to see other facilities throughout the country provide the same level of support to the NCTTA.

Brian also points out that with the increasing awareness of the long term Mental and Physical benefits of Table Tennis, and the Team Building aspects, it just makes sense that AGTTA, should help college athletes participate in a great tournament environment in their BiAnnual event.  He went on to say, he would like to see Corporate America support these efforts, as this sport improves mental performance and physical well being of employees.

View this document for the whole article and photos.

AGTTA’s friends Emilie Lin and Daniel Ng were selected to the USATT Junior Girls Team,  and the USATT Mini Boys Team, respectively. Congratulations to both!

Eric Xie has become AGTTA’s Youth Director – glad to have him on our team!

AGTTA is pleased to share a recent visit to our club on Tuesday, December 1, 2015 by current World # 50, Olympian, and ITTF 2015 Male Star of the Year, Quadri Aruna from Nigeria.

It was a real treat to have Quadri at our club and have some of our members play with him.

Every Sunday afternoon, beginning at 1:30, AGTTA offers free group coaching. The free coaching program has become one of the most popular features of our club. Classes geared toward juniors, beginner adults, and intermediate level players help our players develop their skills in a fun group setting. See our coaching page for information about our volunteer coaches. 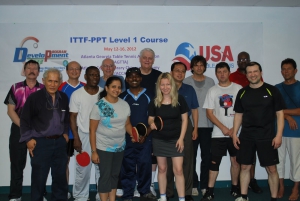 AGTTA and the Atlanta Contemporary Chinese Academy teamed up to host the first ITTF-PTT Level One coaching course held in the southeast part of the United States. Richard McAfee was our course instructor. He has taught this course all over the world. There were 13 participants, several of whom came from outside of Georgia. The course was extremely educational and fun. Thanks to everyone who helped bring this prestigious course to Georgia.